Russian Public Diplomacy. From USSR to the Russian Federation

Russian Public Diplomacy. From USSR to the Russian Federation 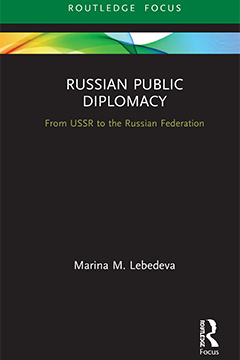 Public diplomacy is widely used in the contemporary world, and this book is devoted to its use and study in Russia.

It explores how, even though scientific diplomacy and people’s diplomacy were used in the USSR, the ideas of public diplomacy were not in demand in Russia in the 1990s. However, following the United States, which turned to the policy after the tragic events of 9/11, Russia also began to develop its own. The author explores how the need for public diplomacy is reflected in the official documents of the Russian Federation and discusses the important step of building new institutions for this purpose in Russia. She analyzes how the development of the practice has led to its study, with Russian scholars focusing mainly on the tools and approaches of implementing public diplomacy by various states. The book discusses the relationship between public diplomacy and soft power and compares Russian approaches with those available in worldwide practice and theory.

This book is intended primarily for students and researchers of international affairs specializing in Russian foreign policy and/or soft power issues. It will also be of interest to practitioners in public diplomacy, such as ministers of foreign affairs, NGOs, and the media.